China will increase export tax rebates on almost 1,500 products from March 20, the finance ministry said on Tuesday, as the government looks to ease the pressure on companies hit hard by the coronavirus outbreak. The Ministry of Finance said 1,084 products, would have the rebate raised to 13%, while another 380 products will see the rebate rise to 9%. It did not specify the previous rebate rates. The rebate of styrene monomer and ethylbenzene would be raised from 10% to 13%. The rebate of ABS, PS and EPS would be raised from 9% to 13%.

China's styrene capacity grows rapidly in the recent years, particularly since 2019 with the startups of Zhejiang Petroleum & Chemical and Hengli Petrochemical. Import dependency decreased to around 28% from 44% in 2012. Import volume was little changed between 3 and 4 million tons per year. 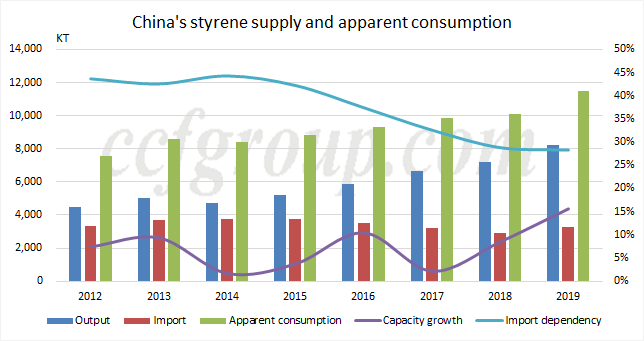