Low-melting PSF develops quickly in PSF industry in recent years. It used to be applied to nonwovens and non-glue cotton at a small amount owing to lightness. As used for mattress increasingly, its consumption surges, reflected in the improvement of capacity utilization. In 2017, the low-melting PSF plants ran at nearly full capacity and in 2018, the capacity saw rapid expansion.

After temporary stabilization, polyester feedstock started to weaken and low-melting PSF was also discounted in trading, dragging down the market. Now the low-melting PSF market still stayed in downward territory.

From above chart, it can be seen that low-melting PSF price fluctuated downward since Sep 2018 and hit year’s low at present. And it seems to trend down further. The cash flow ranged in 500-1000yuan/mt, flat with in early 2018 and also parallel with PSF 1.4D for spinning.

Therefore, although low-melting PSF is sold moderately in the market and the inventory is not high, the cash flow is compressed obviously. That means the market has stepped into saturation from tightness gradually, which also can be seen from the import and export data.

South Korea and Taiwan were the major import origins of low-melting PSF. 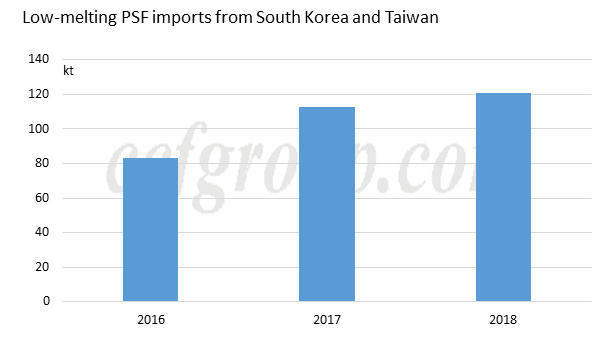 Combined with production, both production and imports of low-melting PSF in China increased obviously in 2017, while the increase slowed down in 2018. It was related to the sharp ups and downs during Aug–Oct 2018, and on the other hand, it was also a reflection of the market stepping into saturation gradually after supply increased.

Every industry will experience the process from tightness, saturation, surplus to self-adjustment. Currently, solid PSF market has experienced it and can handle it skilfully, while low-melting one is experiencing.