The result of this survey was largely similar to the investigation of 100 sampling enterprises CCFGroup made. During the investigation, 50% of companies reflected that their orders improved, and most reflected the orders increased by 10-30% on the month, even higher at 50%. Around 33% of companies said orders failed to improve, and 17% of enterprises expressed that the orders weakened compared with Apr.

Some traders hoarded up stocks, resulting into the exaggeration of the actual demand. Some fabric mills offtook orders, but it was not driven by the real demand rather than by the speculation of traders in expectation of better demand in later period. The improvement of the actual demand may be not as smooth as it presented based on current status.

Demand is of great possibility to rise weakly on the month, which does not worth much attention, while the durability of the orders should be noted later. Fabric mills did not see orders in Apr and witnessed some orders in May, which could be felt easily, but whether the orders have durability in May-Jun and how much will improve should be concerned later. Currently, the speculative expectation is far ahead of the real demand. 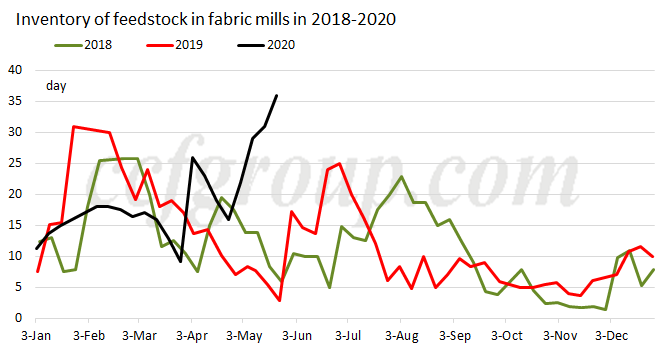