The World Bank projects that the free trade agreement will help raise Vietnam's gross domestic product by 2.4% and lift exports 12% by 2030. Tran Tuan Anh, the minister of industry and trade, has said the agreement will speed the reduction of poverty in Vietnam. 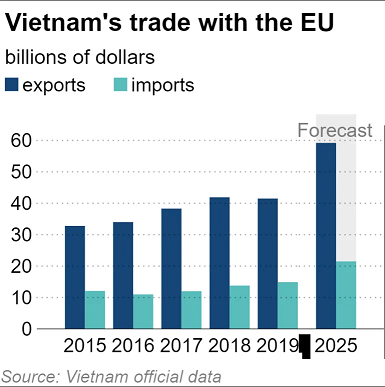 "The EVFTA is now more important than ever, as trade wars and a global pandemic disrupt normal business operations on an unprecedented scale," European Chamber of Commerce in Vietnam said on Monday. "This agreement represents a true 'win-win' not just for European and Vietnamese enterprises; but also for citizens on both sides. Now, the next step is to ensure a smooth and effective implementation," EuroCham added.

Nguyen Thi Thu Trang of the Vietnam Chamber of Commerce and Industry said the deal will drive businesses to reignite their export activities after market demand declined due to the coronavirus pandemic.

The trade deal gives the EU, whose Vietnam-bound exports include aircraft and automobiles, greater access to an attractive consumer market.

Post-Brexit Britain will be part of the EU trade pact with Vietnam until the end of 2020. The U.K. ambassador to Vietnam, Gareth Ward, told British companies here in an online conference that the two countries are working on a bilateral trade deal and expect to reach an agreement by year's end.

Vietnam is also part of the free trade effort known as the Regional Comprehensive Economic Partnership, which includes all of Southeast Asia as well as Australia, China, India, Japan, New Zealand and South Korea. The country also seeks a trade deal with Israel. Local companies are urging Vietnam to negotiate a free trade agreement with the U.S. as soon as possible.