Compared with the quick reaction in nylon 6 CS chip market, there were bigger potential problems in HS chip market actually. It was mainly in inventory. 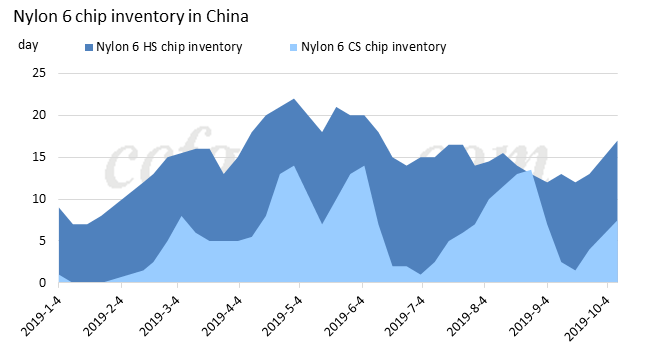 As shown above, the stock of nylon chips continued to rise since mid-September. According to the latest statistics after the holiday, the average inventory of nylon chip plants had reached 12 days (calculated on the basis of full production), which could be calculated to be 150,000 tons according to the current chip production capacity and efficiency. As can be seen from the above chart, the current inventory had gradually approached the highest level in the second quarter of this year. In the second quarter, chip plants finally reduced its inventory through a large-scale reduction of production. Based on the bearish outlook toward downstream demand, it was rather probable that HS chip plants would cut production. Many plants including Fangyuan, Haiyang and Jinbo had started lowering the run rate already. But fortunately, the contract trading could barely be maintained, and the problem might be solved by reducing production and contract. However, it was doubtful how long could the market stand the constant impact of low prices.

After the comprehensive analysis, CPL market after the holiday is mainly based on the same trend of upstream and downstream price reduction, and the benefits are be maintained. Nylon 6 CS chip prices have dropped quickly these days, and it could be over reaction, since downstream have not restocked too much before the holiday. And pressure for nylon 6 HS chip is even larger, as the stocks are piled up high. Players may follow production change of nylon 6 HS chip plants recently.