Since the beginning of 2019, imported PE prices had not fluctuated greatly, and the wave was basically controlled within $20/mt. Trading was sluggish except for some regular customers’ rigid consumption. Insiders held still in wait-and-see stance.

But recently offers for LDPE are particularly thin. LDPE price trend has been relatively flat after the surge in 2016. Some insiders expect the price to go moderately higher, although trades are still lukewarm under overall quietness of imported PE market. 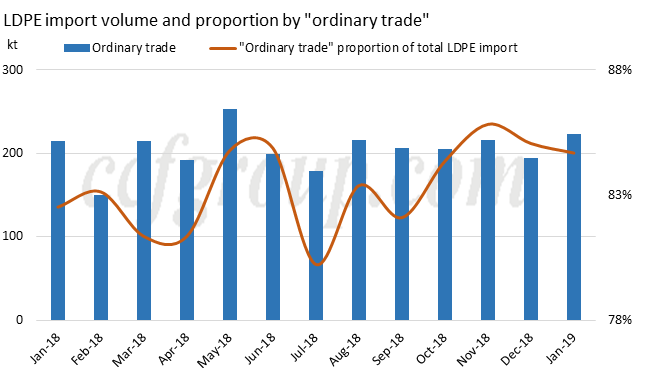 Since the beginning of 2018, over 80% of LDPE import per month was by “ordinary trade”, and over 85% by this term since Oct 2018. It reflected that imported LDPE was converted into RMB form and sold in domestic market, while only a small part was taken by processers, who exported their finished cargoes and got tax rebate. This situation was even more obvious currently, as the USD market had no clear advantage. Traders would consider the capital flow, moderate inventory and then sold these cargoes into RMB market, which could digest the stocks more quickly.

2. Less CFR China offers (spring turnarounds, stocks presold)
LDPE suppliers had not given a large amount of supply in the early stage. For example, Thailand producer PTT had not offered LDPE sources for a long time. It was heard that its stocks had been oversold before the Spring Festival, and their production was still delivering these orders. Another example, Qatar Petrochemical were almost not offering for a long time either. Its sources were quickly sold out after offered. Entering the spring time, many overseas suppliers had turnaround schedules and they control sales volume at the same time. Prices were moderately high and thus supporting CFR China market to some extent. 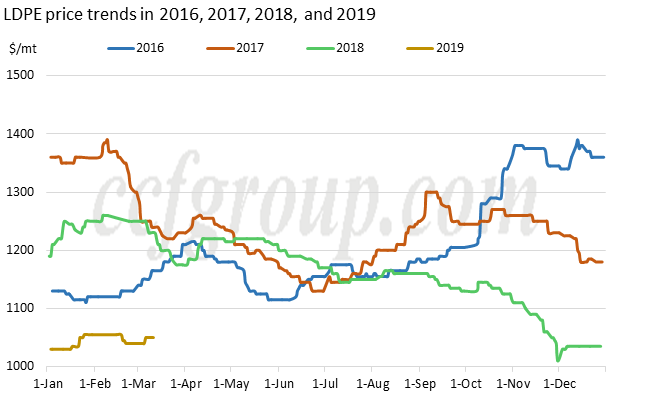 Comparing LDPE imported price in the past 4 years, it is now at the bottom place since 2016. And since LDPE had been weak beginning Q4 2017, the pessimistic trend was lasting for too long time. In addition, there were normally a round of rebound after the Spring Festival (not yet in 2019), and players are expecting one as there are no heavy bearish news over the market. There is opportunity and space for LDPE to rebound.

In summary, LDPE has been hovering around $1,050/mt for a long period. Recent suppliers’ offers have signals some increase space. In the case of limited supply in late market, LDPE CFR China price is expecting an upward trend.