As the previous orders were finished since the end of Feb, PSF plants faced the pressure from later orders, especially polyester yarn mills. During this period, the sales, inventory and profits of polyester yarn all showed positive appearance, and the price also kept stable. But later, the inventory accumulated, forced by soft orders. 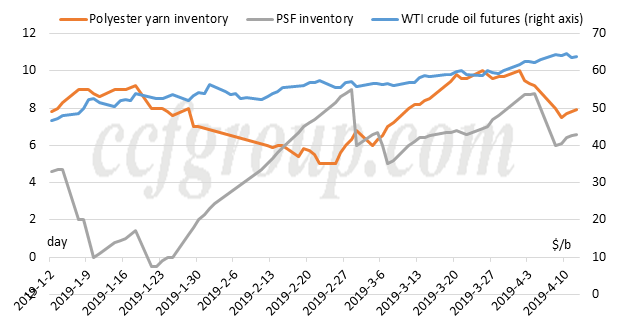 In late Mar, the market presented some changes due to the VAT rate cut. From Mar 20, both upstream and downstream witnessed optimistic sales ratio. The inventory of polyester yarn transformed from accumulation to average 10 days and that of PSF stayed at 7 days. However, the improvement of demand was just on the surface. In fact, the good sales ratio of PSF was mainly attributed to the orders placed in advance. PSF inventory then increased and the sales were restricted. It was reflected in Apr. In early Apr, the orders were so scarce on the market and little PSF was sold. Although the sharp rebound of PTA on Apr 4 brought intensive orders which were still advanced, it is still an overdraft of later demand.

The short-term situation will continue later, but the end-user demand still needs attention. The influence of soft demand will be reflected later and the operation and judgment of risks will be more significant.