Polyester market experienced great up-and-down in the second half of 2018. The whole industrial chain rebounded since early-Dec stimulated by eased Sino-US trade conflict and the news of crude oil output cut in OPEC and Non-OPEC, which promoted the speculative anticipation and production activity of downstream market.

Inventory burden was mitigated effectively in PSF and PFY plants after sales improved, and the pre-sales of PET bottle chip also apparently climbed up, which may be tolerable in the future. Inventory pressure of PSF plants was smaller than that of PFY plants as many PSF plants had turnaround or cut production around Sep, so the stocks of PSF were also obviously lower than those of PFY after destocking.

Cash flow of the whole polyester industrial chain did not improve when price rebounded. 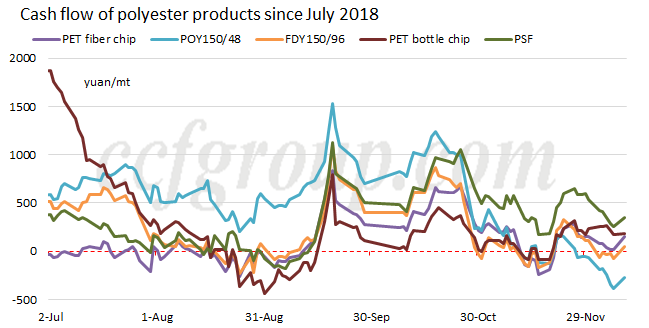 PET bottle chip, PET fiber chip and PSF plants suffered huge losses from end-Aug to early-Sep, so intensive production suspension and curtailment appeared. Some PFY plants also scaled down production mainly resulted from high inventory, but the time lasted short, so the influence to PFY supply was smaller than other descriptions.

Cash flow of PFY was the worst among other polyester products since late-Nov, and the losses enlarged since Dec when price rebounded. Most POY and FDY was not profitable, with deficit of POY bigger than that of FDY and losses of medium-to-fine denier FDY larger than coarse deniers. 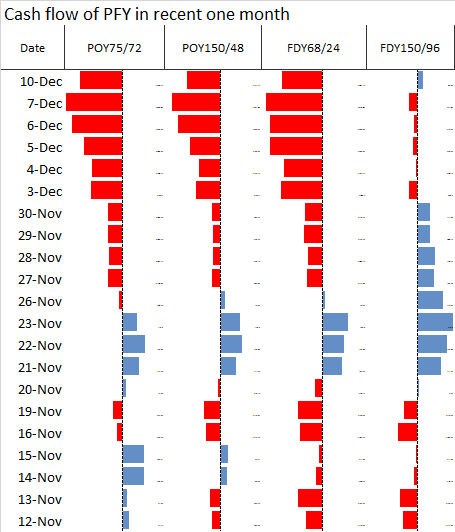 Some polyester plants start arranging production curtailment and suspension for the future under losses burden and with the approaching of Lunar New Year, including a lot of PFY plants. The production adjustment arrangement for the Spring Festival in PFY plants is earlier than past years. By now, the turnaround and production slash plan has been above 3.25 million tons, sharing around 6% of total polyester capacity. Among this, around 2.1 million tons are scheduled to suspend or cut production in Dec, occupying around 4%. Actually, some other polyester plants have planned to have turnaround in later period but the time is not decided. The actual production reduction and suspension is expected to be bigger than anticipated, and following-up trace will be made by CCFGroup.

Polyester output may be lower than anticipated in Dec amid the production slash and suspension. According to current assessment, operating rate of PTA plants may rise with higher PX-PTA spread, and the production may increase. The destocking pattern in Dec may change into slight inventory accumulation. With high run rate of MEG industry, stocks are likely to ascend by around 100-150kt in Dec.