The traditional peak season “Golden Sep and Silver Oct” in the second half of year turns into “Iron Sep and Copper Oct”, which is a big contrast compared with the first half of year, surprised the market. Sharp up-and-down of feedstock in the third quarter was related with such circumstance but the main reason was the chain reaction of muted sales of textile and apparel.

Sales of textiles and apparel rebounded substantially in 2017, and branded textile and apparel enterprises achieved a sound performance in revenue and profit in 2017, which rendered players thinking demand has grown and increasing replenishment in 2018. However, the fact is that sales growth rate of textile and apparel started slowing down from the second quarter of 2018.

Apparel sample production, fabric manufacture and apparel production in textile and apparel companies has a process, so the orders of fabric need to be placed in advance. In expectation of 2018, especially a sound anticipation toward the demand in the second half of year, a lot of orders were successively placed in the first half of 2018, and some orders were settled in advance with continuously rising feedstock. Thus, sales and orders of grey fabric performed well in the first half of 2018, and supply of conventional fabric from water-jet looms was even in short. Overall inventory of grey fabric was low in weavers. But the consumption of textiles and apparel was worse than anticipated this year: textile and apparel enterprises witnessed slower sales and mounting stocks from Q2. Coupled with dramatic up-and-down of feedstock in Q3, sales of grey fabric became muted from Q3, orders reduced and inventory accumulated. 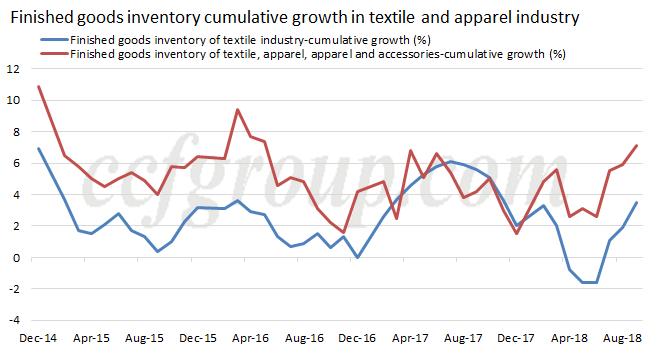 Inventory accumulation appeared at first in apparel industry, then conducted to weaving industry and finally to the polyester plants. The whole polyester industry and downstream industry chain have faced inventory pressure since the fourth quarter. Polyester and weaving plants have started to cut production gradually, but overall effect of destocking was not obvious.

Generally speaking, sales of textile and apparel moved up evidently, especially in 2017 when sales reached a relatively good level, as domestic demand and external demand began to warm up from 2017. Under this expectation, textile and apparel enterprises increased orders and replenished stocks in 2018. Feedstock continued to move up, resulting into a high run rates of the weaving industry in the first half of 2018. Traders speculatively hoarded large quantities of products, but the actual terminal domestic demand decreased in the second quarter. Stocks of fabrics and clothing began to accumulate rapidly amid Sino-US trade war after the third quarter, which gradually transmitted to the polyester sector. Feedstock market declined at the same time, so traders undersold and pessimistic view was widely spreading. In 2019, inventory pressure in textile and apparel industry will still needs time to ease, especially the out-of-season apparel requiring to be sold. In addition, traders are expected to order cautiously again amid terminal consumption and external demand pressure. Although inventory pressure of weaving and polyester market can ease through cutting production, terminal orders will be limited in 2019. At the same time, in anticipation of fewer orders, capacity pressure may appear again due to massive operation startup of weaving and polyester units in the past two years.