China Import and Export Fair, also known as the Canton Fair, the largest trade fair in China, successfully completed its work on Nov 4 in 2018. The popularity and transactions of China Import and Export Fair can reflect the future demand situation. Therefore, we analyzed this Canton Fair and made some comparison with previous years’ hoping to provide some reference for the market.

Participants dipped, and the driven force of Belt and Road remained firm 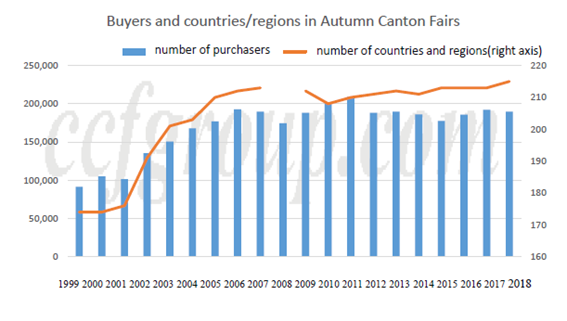 Overseas purchasers in the fair and export turnover moved down slightly. About 189,812 purchasers who come from 215 countries and regions attended the trade fair, down 1% same period last year.

Structure of purchasers in Autumn Canton Fair in 2017 and 2018

According to the number of buyers from past years, China Import and Export Fair in autumn has fluctuated slightly in recent years, and the number of different countries and regions increased gradually. As for structure of participating purchasers, purchasers in Asia accounted for the largest proportion, followed by Europe and U.S. The following figure compared the structure of purchasers in the past two years.

Top 10 countries and regions: Hong Kong, U.S., India, Korea, Thailand, Russia, Taiwan, Malaysia, Japan and Indonesia. Among them, 10,700 and 700 purchasers from U.S. dropped by 4.07% compared with the same period last year. The Canton Fair will expand the market along “The belt and Road" as a key market, and the buyers and purchasers of all countries and regions along the belt and road will grow to 0.16%, up from 0.16% over the same period, accounting for more than 44% of the total number.

Turnover dropped slightly, and that of textile and apparel decreased evidently 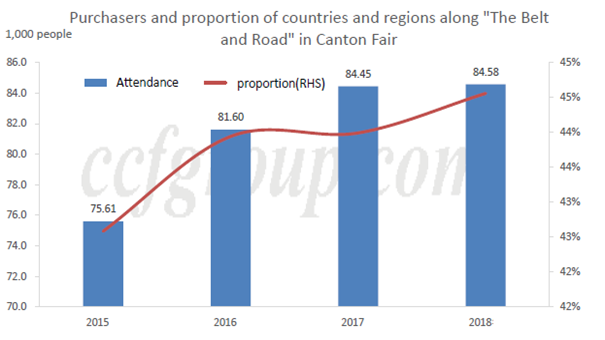 Total export trading volume of this fair was $29.86 billion, down 1% compared with autumn traded fair in 2017. Judging from the total trading volume, the fair performed better than expectations with only a slight fall.

From turnover of China Import and Export Fair over the past years, it showed a downtrend in 2011-2015 and an increase in 2016-2017, indicating that the fall of turnover of the Fair may be affected by many factors, not only the Sino-US trade war factors. According to the classified data, mechanical and electrical goods still ranked first in transactions, accounting for $16.187 billion, light industrial products accounted for $7.299 billion, and $1.514 billion for textile and apparel.

The export turnover of with countries along "The Belt and Road" reached $9.63 billion, an increase of 2.7%, accounting for 32.3% of total turnover. Exports to U.S. amounted for $2.79 billion, down 30.3%compared with same period last year.

There were several reasons for falls in participants and turnover in China Import and Export Fair. Firstly, Sino-US trade friction and tension Sino-US bilateral trade and economic relations led to uncertainty in Sino-US relations and global trade. Secondly, growth in some major economies slowed down. IMF released its World and China Economic Outlook Report in Beijing in Oct. 18, 2018, in which global economic growth forecast decreased to 3.7% in 2018 and 2019, 0.2% lower than forecast in Apr. Growth forecasts for Eurozone, Japan and UK have decreased. Thirdly, under strong impact of U.S. dollars, some emerging market currencies have depreciated significantly, and the outflow of market capital exchange rate has also cast a shadow on the purchaser's psychology.