World cotton production is expected to rise 6.8 per cent with yields rebounding in several countries and area also rising, according to the first projections for 2019-20 season released by the US department of agriculture (USDA). In the US, cotton production is expected at 22.5 million bales, based on higher planted area and sharply lower abandonment. 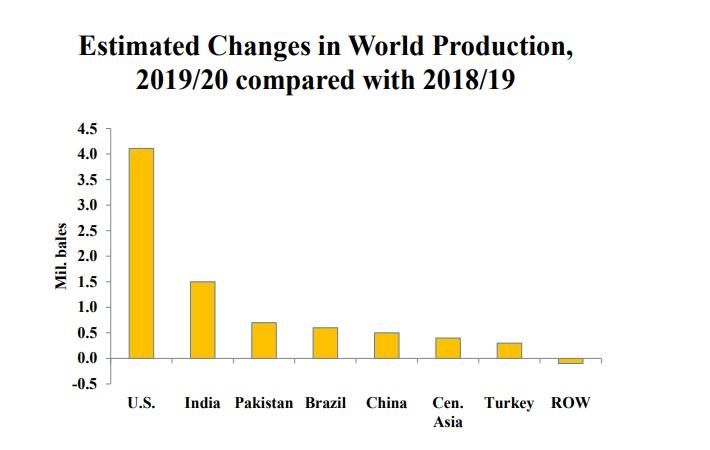 The outlook for China shows imports, consumption, and production projected up, while stocks are expected to fall for the fifth consecutive year. “With the decline in China’s stocks, stocks outside of China are projected to increase significantly. As a result, the average A-Index and the season-average US farm price are expected to decline,” the Foreign Agricultural Service of USDA said in its ‘Cotton: World Markets and Trade’ March 2019 report.

World trade is projected to expand, bring it near the record levels seen in 2011-12 and 2012-13. Much of the increase is expected in China as smaller sales from the State Reserve reduce available domestic supply, meaning that higher imports will be needed to close the gap, the report said.

Global consumption in 2019-20 is expected to continue growing, but at a rate slightly below its long-run average based on weaker global economic growth.

Meanwhile, for 2018-19 season, cotton production is forecast up slightly, led by larger crops in Brazil and Pakistan more than offsetting lower production in Australia. Trade is projected down slightly on lower imports for Indonesia and lower exports for Brazil. Global use is virtually unchanged. The US forecast is unchanged. The US season-average farm price is lowered 2 cents to 70 cents/lbs.