Firstly, downstream plants concentrated on using feedstock purchased before when PFY price was reducing, and replenishment appeared for several times, but the feedstock inventory was mainly around 5-10 days. Before Wednesday, the feedstock prepared in downstream fabric mills and twisting units was relatively low, so purchasing potential was huge. Secondly, price of PFY has hit yearly low. Among these, price of FDY and DTY has touched yearly low, and that of POY was close to the low level in May. Price of PFY declined slowly in recent period, and PTA-PX spread has been narrowed to below 1,000yuan/mt, with limited downward space, so downstream plants successively had bottom-fishing. In addition, with the approach of traditional peak season “Golden September and Silver October”, downstream players showed higher buying confidence, holding expectation toward peak-season demand. Some downstream buyers even worried supply shortage of PFY after peak season came as the stocks of finished goods were not high in PFY plants. By Wednesday, stocks of POY, FDY and DTY were around 4.5 days, 9 days and 14 days respectively. 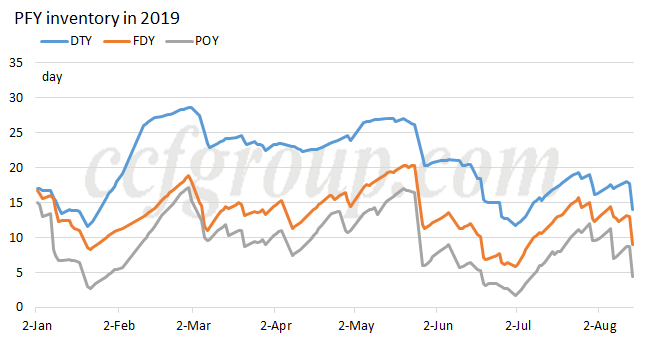