stocks of the PFY AND PSF

For the peak season of September-October in the second half of the year, most of the downstream players have certain expectations, which is one of the reasons that support them to maintain high inventory, but as to how good demand can be, many players still have some concerns. The first is the uncertainty of the COVID-19 worldwide, and the second is the concern about the impact of the epidemic on consumption. Taking China as an example, even though the pandemic has been basically controlled in April, the sales of textile and apparel still showed a negative growth of 18% year-on-year. There has not been a significant increase in supplementary growth with eased pandemic. Instead, consumers become more cautious in purchasing textile and apparel because of the decline in revenue. This is the case in China, not to mention the overseas market. Another concern is that the current stocks of finished goods and raw material is very high in downstream market. Even if demand rises, it will be difficult to digest the inventory produced in the first half of this year only by sales improvement from September to October. The contradiction is hard to be solved. Downstream players with high inventory may rush to sell at low prices during the peak season. Price of grey fabric may be difficult to rise, but the so-called peak season demand is likely to be only a flash in the pan. June-July is the traditional slack season, and players are expected to focus on making samples. 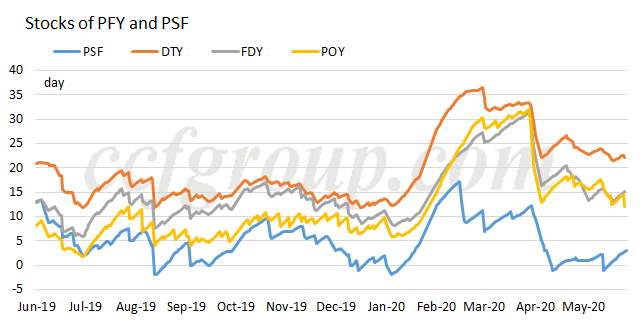