the amount of nylon 6 chip imported from Malaysia increased significantly

iewing nylon 6 chip imports by origins, the reduction from Taiwan's imports was the most obvious, as the import volume from January to August decreased by 48.8% compared with the same period of last year. The proportion of imports from Taiwan fell from 42.2% to 21.4%, which was the most obvious among all importing countries and regions. Imports from Russia and South Korea also decreased slightly. 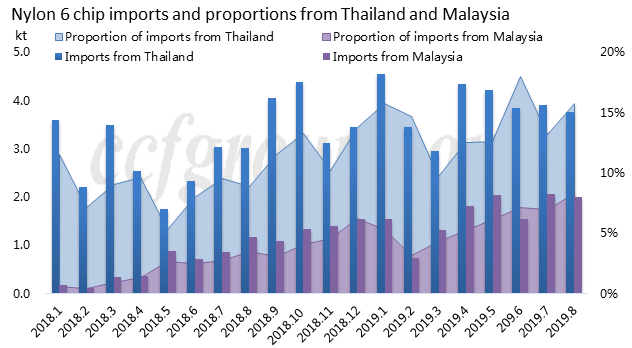 In contrast to the declining imports in the past two years, the amount of nylon 6 chip imported from Malaysia increased significantly. The proportion of Malaysian nylon 6 chips had risen from less than 1% in early 2018 to around 8% so far. It was mainly because that China enlarged imports of BASF’s modified products (compounds) in BASF in Malaysia.