US share in China cotton import dips sharply in 2018-19

The US share of China cotton imports fell to 18 per cent in 2018-19, down sharply from 45 per cent in 2017-18, and was well below the 30 per cent share seen over the previous five years, according to the US department of agriculture (USDA). This was also the lowest market share since China reformed its cotton sector in 1999, the USDA said in a report. 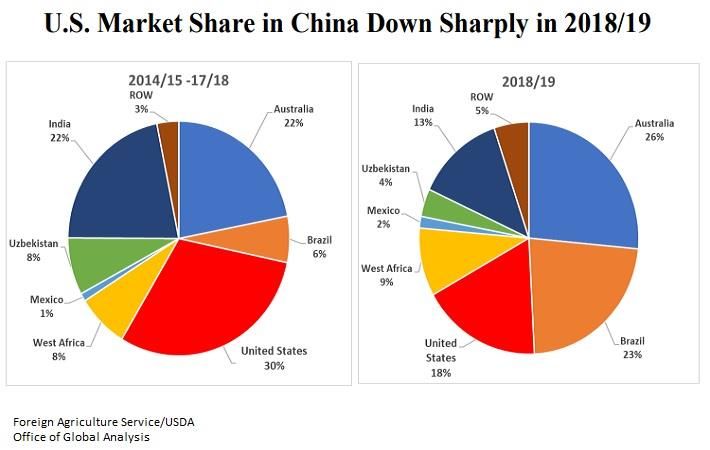 "In 2018-19 cotton season, the US cotton faced two challenges in China; first, the additional tariffs being placed on certain imports of US cotton; and second, the arrival on the world market of two consecutive record Brazilian crops," the Foreign Agriculture Service of the USDA said in its September 2019 report 'Cotton: World Markets and Trade'.

India’s share in China's cotton import was also below the 5-year share. "India’s share has been trending down since China began limiting imports outside of the WTO tariff-rate quota (TRQ). With limited access, importers prefer to bring in machine-picked cotton. Also, India’s continual increase in its domestic Minimum Support Price (MSP) coupled with lower world prices limits its cotton competitiveness, the report said.

Uzbekistan’s market share was also at the lowest level since China’s cotton sector reform, but this was largely due to Uzbekistan’s domestic policies which are expanding domestic use and limiting exports.

Brazilian cotton benefited most from the lower market shares by the US, India, and Uzbekistan, while Australia, West African countries, and most other exporters saw small increases in their share in China market.

Brazil’s then-record 2018 crop provided exporters with ample supplies, and the prospects of an even larger 2019 crop gave exporters an incentive to ship the cotton rather than carry it over. Brazil also benefited from purchases for China’s State Reserve. Traditionally, State Reserve purchases have been primarily of US cotton, but due to the ongoing trade dispute between the US and China, the State Reserve purchased almost exclusively Brazil cotton in 2018.

With US-China trade tensions ongoing and Brazil having a second record crop, it is unlikely that US share in Chinese cotton import will recover to historic levels in 2019-20, the report said.