Direct-spun PSF plants mostly ran at high rate as they experienced tight supply during Spring Festival holiday. As scheduled, the operating rate climbed up to nearly 90% and kept stable then. The sales of direct-spun PSF were negatively affected by soft end-user demand in Mar and slump of polyester feedstock in Apr. The sales in Mar were mainly owing to the demand advanced by tax rate adjustment. In fact, the demand did not improve. Later on, the demand contradiction appeared and sales ratio weighed increasingly on direct-spun PSF plants. 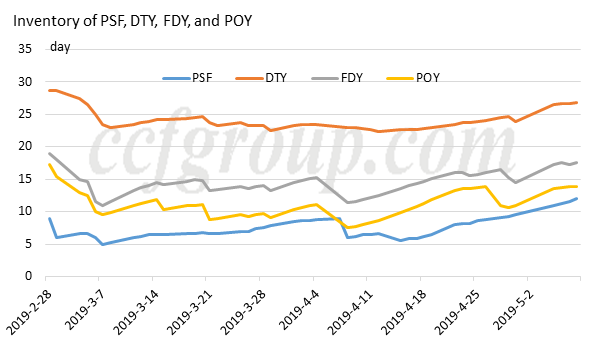 In Apr, the market players’ mindset changed from stable to bearish. Direct-spun PSF price was seriously burdened with quick fall of polyester feedstock and sluggish end-user demand. With additional escalated China-US trade war, the market sentiment was dull, which is unfavorable to the sustainable development later. In end-Apr, direct-spun PSF plants lowered offers, but it was not effective for sales promotion. As a result, downstream spinners turned cautious to restock. Many of them operated with low feedstock inventory amid bearish anticipation. 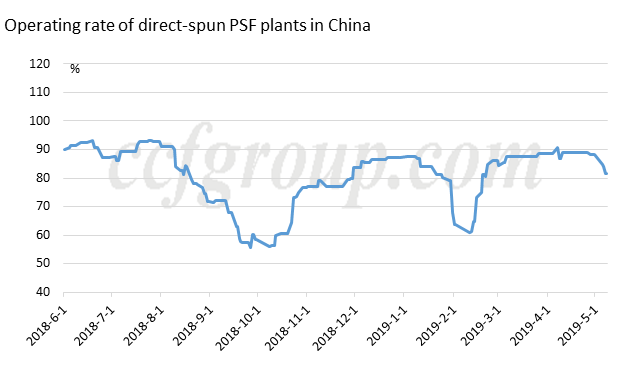 Polyester feedstock may sustain the weakness later. And the bearish expectation to PX started to show its influence. In addition, processing cost of PTA reached nearly 2000yuan/mt. As a consequence, more concerns about the decline showed up on the market.

Currently direct-spun PSF plants reduce production increasingly and rapidly, similar to that in last Aug. On the other hand, it is favorable to support cost and reshape market confidence. The more flexible operation of polyester plants also reflects the improvement of market development. As a whole, direct-spun PSF price is expected to gain some support later.